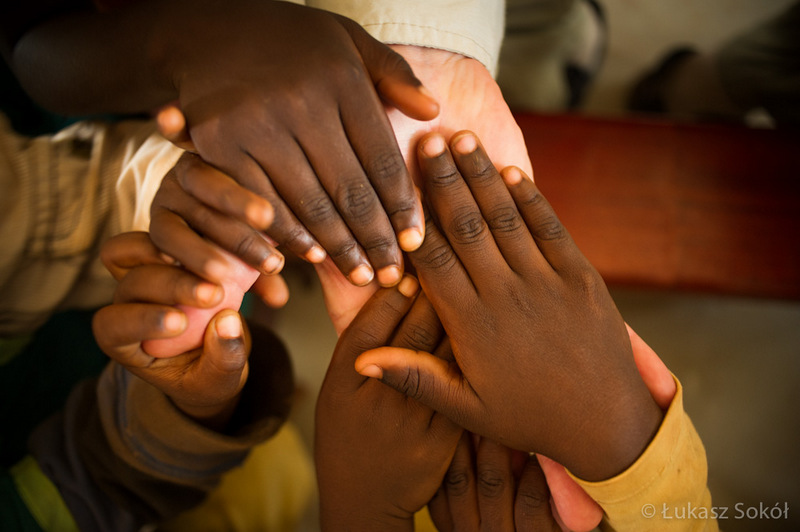 MAITRI Movement in brief – the mission, goals and activities. MAITRI Movement – full name: The Movement of Solidarity with the Poor of the Third World MAITRI remains a federation of ordinary people’s communities working together to provide a support to those living in very poor economic conditions of the developing countries.

1975 marks the beginning of the first formation. It has been then set up by a student Jacek Wójcik who stopped by the Missionaries of Charity Centre in Calcutta during his travels in India and decided to volunteer there, inspired by the journey of Mother Teresa and the work of her congregation.

The constitution of our movement says that MAITRI Movement mission is expressed through the acts of love and care towards the poorest. The members of the community respond to their obstacles, as they believe, by answering the God’s call. They are inspired and led by the example of Mother Teresa and Saint Francis of Assisi but mainly of Jesus Christ.

The word “maitri” was adopted from Sanskrit – India’s ancient language. Contemporary meaning is a brotherhood, friendship.

The values shared by our participants are derived from the Bible Gospels and are consistent with those outlined in our constitution. We believe that the “Maitri” grows through those who:

MAITRI movement consists of the local parish communities which became the base of its organisational structure. According to MAITRI Movement constitution, the local community follows and promotes the mission through an increase of society awareness of the current situation in developing countries and constant support to the poorest. The main goal is the promotion of MAITRI values and advocacy for people in need. In the beginning of 2017, there were already ten active parish communities in Poland in the following cities: Białystok, Bytom, Gdańsk, Gliwice, Lublin, Poznań, Racibórz, Toruń, Warszawa and Wrocław. We also have local structures in the Czech Republic. You can find additional information in the activities reports.

The Board of our Movement consists of persons responsible for the local parish communities who oversee and monitor their formation and operations. Chairman of the Board is elected by its members and represents them with the church authorities. MAITRI Movement is also one of the founding members of the “Polish Council of Catholic Associations”.

One of the most prominent figures in the history of our organisation is the late Father Dr Roman Forycki. He was nominated as the National Chaplain of Maitri in 1989 by the Episcopacy of Poland and was heavily involved, for over 20 years, in the development of the community and establishing its purpose and regulations. Under his supervision, the organisation has received its legal status in 2003. The second National Chaplain function was performed by Father Jan Jacek Stefanów SVD between 2011 and 2016 and since 2017 by Father Dr Andrzej Panasiuk.

“Have a Heart Adoption” is currently one of the most important schemes run by our organisation. The programme, initiated in 1996 is a long-term, individual or group sponsorship of orphans or just very poor children, living in developing countries of Africa. You will be provided with the name of the child you decided to sponsor as well as with the information where your money goes. All the funds are passed on to the children through the Polish missionaries or local priests or nuns who in return provide the sponsors with the photos of the children and other details helping to establish the correspondence between them. In Poland, the programme is coordinated by the office in Gdańsk, the initiative is also carried out in the Czech Republic.

During the 20 years of the programme, we have managed to help more than 5,000 children, apart from approx. 3,500 children that are receiving the support from us at present. We helped 20 young people to become priests and right now we are helping 23 seminary students. Maitri “Have a Heart Adoption” was the first scheme of this kind available in Poland. It became a source of inspiration to many other charity organisations and religious orders.

An aid for a health and nutrition centres in Africa

We support also missionary health centres who provide food to malnourished children as well as medical assistance. We help a dozen centres on a regular basis. The centres are located in the following countries: Rwanda, DR Congo, Burundi, Cameroun, RCA. Long term support covers as well providing the food to nursery schools within Catholic missionary centres. One-time sponsorships help to finance medicine, medical equipment for missionary health centres, infrastructure development to ensure communities have access to clean drinking water, construction or extension of existing schools and health centres, purchase of the 4×4 vehicles for the missionaries (so far we have purchased 5) etc. See the list of completed projects. Our aid reaches 53 missionary centres led by 23 different religious orders, including the seminary in Bertoua in Cameroon.

We are committed to bringing a help to all the people in need, regardless of their background or beliefs. We understand that solidarity with the people impacted by poverty is reflected through an ultimate respect towards their equality and dignity as the human being and the rights that flow from it.

The name and the logo of MAITRI Movement

The name and the logo of the Movement are connected with its mission (charism). The full name of the Movement is The Movement of Solidarity with the Poor of the Third World ‘Maitri’. The Movement is a federation of communities of lay people functioning in the parishes of the Catholic Church in several cities of Poland and the Czech Republic.

The meaning of the name of the Movement

‘Solidarity,’ by the teachings of John Paul II, is a Christian virtue tightly connected with love. It embraces all people, starting from the poorest, as the world of suffering calls for solidarity and community. Solidarity encourages lifestyle changes and sharing based on the principle that the created goods should serve all. This spirit of solidarity also means openness to dialogue. ‘We are called to recognize the necessary solidarity of the human family as the fundamental condition of our life together on this earth’ (John Paul II, ‘Message for the Twentieth World Day of Peace’; ‘Sollicitudo rei socialis’).

The word ‘maitri‘ – brotherhood, friendship – was accepted as the Sanskrit word which is the closest in meaning to compassionate love that does not pose any barriers. This word, chosen for the name of the Movement, originates from the language of the people that the Movement’ participants helped from the very beginning. It shows the respect for them as well as for their spiritual and moral, social and cultural goods ‘which […] reflect a ray of that Truth which enlightens all men.’ (see: Declaration on the Relation of the Church to non-Christian religions Nostra Aetate).

‘Maitri -brotherhood’,  ‘friendship’ and ‘solidarity’ are two faces of love which reaches its zenith in exchange. As the Holy Father wrote: ‘ In reciprocal relationships between persons merciful love is never a single act or process. […]. We must continually purify all our actions and all our intentions in which mercy is understood and practiced unilaterally, as a good done to others. […] If this bilateral and reciprocal quality is absent, […] there has not yet been fully completed in us that conversion to which Christ has shown us the way by His words and example, even to the cross. (John Paul II, „Dives in Misericordia”,14). ‘Holy,’ ‘mysterious’ and ‘marvelous exchange’ is often appealed to in the Holy Mass Liturgy when our heart directs to the One who is the beginning and the center of this exchange.

“When, as a missionary in India, I read the word ‘maitri’ for the first time, I was pleasantly surprised. I imagined a group of people aspiring to fulfil their dreams and meet the goals, to tighten the relations with other people basing on respect, understanding, and solidarity. Because ‘maitri’ means love which is reflected in friendship. This word comes from Sanskrit and simply means friendship, brotherhood. Mitro – friend, that’s how I would call a man who I feel close to. When young people from Poland adopted the name ‘maitri’ for their movement, they could not have found a better one. (…). If we wanted to find an adequate word in the vocabulary that is familiar to us – the best would be ‘caritas’. Jesus said: ‘you are my friends’, in Orija language – ‘moro mitro’. (…)”

The logo of Maitri Movement

The logo of the movement is a winged hand inside a rim. The first participants of the movement who adopted this sign were inspired by biblical texts in which a winged hand symbolise Divine help and God’s caring presence. ‘ Hide me in the shadow of your wings’, we read in a psalm. The Holy Scripture also speaks about hands of people reached out to the poorest. This logo also symbolises the openness of the participants and the willingness to stretch out a friendly, supportive hand, which is an extension of the good hand of God, offering help to the poor in need.